Our tour of Bolivia and Peru takes you to the heart of the interesting and colorful Indian cultures of the Andes. We will explore the fascinating city of La Paz in Bolivia, as well as Lake Titicaca. The alpacas that run along the slopes of the volcanoes, the wilderness that reaches beyond the reach of the eyes, and the mountain lakes inhabited by flamingo hordes make the Andean region one of the most amazing tourist experiences on our entire planet.

On the Peruvian side, we explore the floating Uros Islands, the historic Inca capital of Cusco, and the legendary ruins of Machu Picchu. These, perhaps the most famous sights on the South American continent, tell the history of the area and become one of the highlights of the trip.

Arrival in La Paz, Bolivia’s colorful and fascinating administrative city. La Paz is located at an altitude of over 3600 meters. It is the tallest capital in the world. The city looks like it was built on the bottom of a crater. Despite its large population, La Paz is quite peaceful. The city is known for its narrow alleys, colorful Indian markets, and the popular witch market, Mercado de Hechieceria, which sells folk cures, herbs, and Native American prophecies.

La Paz is also close to interesting sights to visit. The Valle de la Luna or Ball Valley is located about 11 km from La Paz, where you can explore the magnificent mini canyons. We take the first day calmly and get used to the thin atmosphere in the world’s tallest capital. Exploring the city’s markets and old town, bursting with beautiful handicrafts and colorful Indian costumes. (A)

In the morning we will take a guided tour of the old and new districts and visit the Moon Valley below the city. (A)

In the morning we visit the mystical archaeological ruins of Tiwanaku, after which we move to the city of Copacabana on the shores of Lake Titicaca. The small town of Copacabana is located at an altitude of 3820 meters just off the Peruvian border. It serves as a starting point for lake trips to the sacred Inca Islands, Isla del Sol and Isla de la Luna.

The popularity of Copacabana is enhanced by the most important saint figure in South America, the Virgin of Copacabana, who appears in the city church. Copacabana is still a sacred place for locals, which is becoming one of Bolivia’s most popular tourist destinations. In the afternoon we explore the city on foot. (A)

We take a motorboat to the sun island (Isla del Sol), considered the birthplace of Inca culture. Manco Capac, the first Inca, received instructions there from his father in the sun to establish an Inca state. Opportunity to visit a local Aymara Indian village and take hiking trips on the island. (A)

Return by boat to Copacabana. Moving across the border to the Peruvian side into the town of Puno. Puno, inhabited mainly by indigenous peoples, is the gateway to the traditional reed-floating Uros Islands on Lake Titicaca. (A)

During the day we visit the floating Uros Islands and discover the fascinating life of the islands. The male nation inhabits about 40 reed-braided islands on Lake Titicaca. The islands extend from Puno Bay to the Capachica Peninsula. The tribe lives mainly by fishing, hunting and tourism. They are known as skillful reeds. The islands and dwellings inhabited by the male people are completely woven from totora, a reed growing in Lake Titicaca. In the evening we return to Puno. (A, L)

A trip to the cradle of Peruvian Inca culture, Cusco, in stunning mountain scenery. The former capital of the Inca Empire and the current UNESCO World Heritage Site, Cusco is the oldest continuously inhabited city in Peru. With the arrival of the Spanish conquerors in 1532, the Incas ruled from Cusco from northern Argentina all the way to the Colombian border.

Cusco is located in southeastern Peru, at an altitude of 3,400 meters in the Andean Highlands. According to legend, the city was originally built in the form of the Inca holy animal cougar. History can be seen everywhere in Cusco; The town has numerous old inca walls, narrow cobbled streets, merchant houses built on top of old Inca palaces and numerous churches. Today, Cusco, with a population of 360,000, is still inhabited mainly by descendants of Incas, whose mother tongue is mainly Ketchua. (A)

During the noon guided tour, we will explore the main attractions of Cusco. The afternoon is your time to set the mood in the alleys and markets of the old Inca capital. (A)

DAY 10 – THE HOLY VALLEY OF THE INCAS

From the morning we move to the sacred valley of the Incas. During the day, we explore the sacred and ingeniously constructed sites of the Incas. We used to visit the ruins of the lively town of Ollantaytambo as well as the colorful markets of Pisac. As time permits, we will visit some of the following sites: Koricancha Sun Temple, Sacsayhuamán Fortress, Kenko Cave Temple, Puka Pukara or Tambomachay. We will stay in Ollantaytambo. (A)

In the morning we head by train to the village of Aguas Calientes, from where there is a transport to the ruins of the legendary Machu Picchu. The lost city of Machu Picchu is a UNESCO World Heritage Site and the most famous archaeological site in all of South America. The ruins of the city are located at 2430 meters above sea level in a saddle between two mountain peaks, above the Urubamba River. The ruins are landscape architecture at its best. They are divided into agricultural and urban quarters, which have served as places of residence and worship for the clergy / nobility.

Machu Picchu, founded by the Incas in the 15th century, was abandoned with the collapse of the Inca Empire. However, the Spanish conquerors never found the city, and it was forgotten in the jungle cache for centuries. American researcher Hiram Bingham rediscovered the ruins in 1911. A visit to Machu Picchu crowns our visit to Peru. For a day, we explore the wonders of a city lost to the Incas. Return by train for the evening to Cusco. (A)

Free time in Cusco before moving to the airport and flights via Lima to Finland. (A)

Arrival in the home country.

The price of the trip includes

The price of the trip does not include

Finnish citizens do not need a visa when traveling to Peru and Bolivia. For both countries, a two-part tourist card is issued upon arrival in the country and must be kept throughout the trip. The card is requested when staying in hotels and when leaving the country.

Hepatitis A vaccination is recommended for all travelers to Peru and Bolivia. Those vaccinated with yellow fever, including those coming directly from Finland, should keep a vaccination certificate with them. If you are visiting the Amazon region after a trip, we recommend taking anti-malarial medication.

You will need normal travel insurance for your trip with cancellation protection. The insurance must cover a stay of more than 3,000 meters, as well as any costs of treating mountain sickness.

Arriving in La Paz, 3600m above sea level may cause some mild headaches and shortness of breath. However, these mild symptoms of mountain sickness disappear frequently and within a day.

The official languages ​​of Bolivia are Spanish, Quechua and Aymara. The official language of Peru is Spanish. In addition, numerous Indian languages ​​are spoken in the country. Few Peruvians and Bolivians speak English, and learning a few phrases in Spanish before the trip will help with daily interactions. We recommend that you bring a Spanish dictionary with you on your trip.

The Bolivian currency is the Bolivian Boliviano (BOB). The currency of Peru is Nuevo sol (PEN). In Peru and Bolivia, there are plenty of ATMs in the cities that recognize the most common international credit cards. You can withdraw US dollars from the vending machines and drain the country’s own. The currencies of Peru and Bolivia cannot be exchanged in Finland before the trip. We recommend bringing in US dollars in banknotes under $ 100.

The climate in Bolivia and Peru varies between the high and arid mountainous regions of the west and the tropical warm and humid lowlands of the east. The climate in the Andes can be divided into a rainy summer season in November-April and a dry winter season in April-September. In the winter of South America, temperatures vary between + 10 and + 25 degrees C depending on the altitude. The area is then mostly dry, bright and warm and the best time to visit and move around the mountains. At night, temperatures often fall close to zero. During the South American summer season, temperatures rise to + 20-30 ° C. In this case, the area is very humid and rainy; roads can be muddy and difficult to navigate. The climate in the Andes can vary greatly from day to day and is volatile.

Top culture is typical of Peru and Bolivia. However, it should be remembered that it is always voluntary. The exception to this is airport bag carriers, who get paid for tips. The normal tip for an airport bag carrier is 1 sol / bag (25 cents). If the service has been good in the restaurant, you can leave 5-15% of the total amount of the invoice to the waiters. 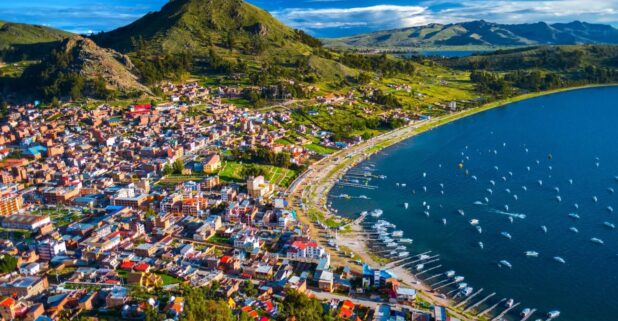