Augsburg’s Fuggerei is like a city within a city. The blocks surrounded by walls live their own lives. 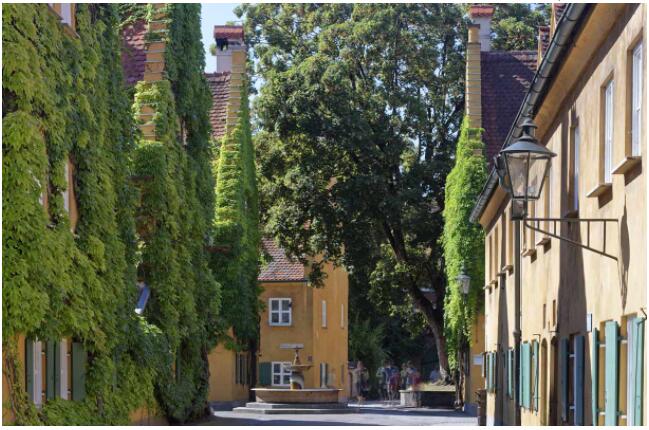 Many of Augsburg’s attractions are related in one way or another to the city’s long history. Augsburg is one of the landmark cities of the Reformation – the Peace of Augsburg was signed here in 1555, which replaced the rift between Catholics and Protestants that set in motion the theses of Martin Luther . The same process involves the Augsburg Confession, created in Augsburg in 1530, which further summarizes the main doctrines of the Lutheran Church. Today, about 60% of Augsburg Christians are Catholic and 40% Protestant.

There are numerous spectacular churches in the city to visit. In addition to the cathedral, St. Anna, St. Moritz and St. Ulrich are worth seeing. Each of these has its own fascinating story and St. Anne’s Church, for example, has a very beautiful courtyard. In St. Anna you can also get acquainted with the history of the Reformation and an exhibition about the life of Martti Luther. St. Moritz, on the other hand, has been renovated from the inside in a bold modern way. The walls have been left completely white in an unusual style and the lighting has been built so that even in cloudy weather the windows seem to be flooded with brightness and light.

In particular, Baroque and Renaissance architecture is strongly represented in Augsburg. The city’s Golden Age mighty clan Fugger was one of the richest clans in the world at the time. The power of the Fugger, whose chamber of commerce, extended far to the new continents, and the Fugger had close relations with the Habsburg dynasty, among others. Augsburg still has palaces from that time, some of which now function in completely different functions, but the Fuggerhaus at Maximilianstrasse 36, for example, is a place where the public can also take a look at the glorious life of the former Fuggers.

The history of the Fuggers can also be explored in the Fugger und Welser Museum . In today’s world, the Fugger family still dominates significant business operations and runs its own private bank, among other things.

Perhaps the most distinctive place to visit in Augsburg is the Fuggerei , which, as the name implies, is inextricably linked to the Fugger family. Fuggerei is a district of eight blocks, which is like its own centuries-old world in the middle of a modern concrete city. The rich members of the Fugger family were known not only as strict capitalists and businessmen, but also as generous benefactors. The Fuggerein district was built in 1521 by Jakob Fugger, who wanted in this way to provide housing for the needy. With completely selfless ideas, this did not happen, as Jakob Fugger made living a condition that every resident must pray three times a day for him and his family to make sure they survive the Catholic purgatory awaiting death. This rule still applies to Fuggerei residents.

Fuggere has a total of eight streets, three small market squares and its own church, all in their own enclosed area. The entrance fee to the area is four euros for adults and two for children. Even today, the Fuggerei operates strictly according to the rules laid down by its founder. The city selects the residents based on a needs assessment and the apartments are given to those who need them most. Rents have not been raised over the centuries, and even current residents pay the same amount of rent as the poor of the 16th century: 88 cents a year.

No other Fuggerei rules have been modernized, and in addition to prayer rules, residents must remember, for example, that the gates of the district are still closed at exactly 10 pm. A late resident has to pay large sums for a short delay and a longer two – year rent.

Guided tours are also organized for the hangers and it is also possible to look inside one of the apartments. In connection with the Fuggerei there is the restaurant Die Tafeldecker, which serves café products as well as excellent German-style restaurant food also out on the terrace.

The golden hall of the town hall

Augsburg’s old town was badly destroyed in the war, but reconstruction work has restored several important sites to their former glory. One of the prides of the city, the handsome Golden Hall of the Town Hall, is one of the sites badly damaged in the war. The Golden Hall was not reopened until 1985, when Augsburg celebrated its 2000th anniversary. The decorations of the Golden Hall are fabulous. As the name implies, no gold has been spared, there are a total of 2.6 kilos in the walls and ceiling. In addition to gold, a dark walnut tree and large portraits of rulers from different eras dominate the hall.

The Golden Hall is open to visitors for an entrance fee of a few euros. There are also often changing exhibitions in the lobby, which can be visited with the same ticket.

If you are looking for a nice restaurant for dinner, head to Maximillianstraße. Here you will find numerous cafés and restaurants, as well as warm terraces in summer, where you can enjoy the evening until well into the night. There are also plenty of good places to eat on Rathausplatz and the surrounding blocks.

In Bavaria, of course, getting to know beer culture is also an issue. There are several local breweries and breweries in Augsburg, the largest of which is Wirtshaus Riegele . The Riegele is a little away from the city center, yet within walking distance of the shopping streets and very close to Augsburg Central Station.

THE BEST OF AUGSBURG 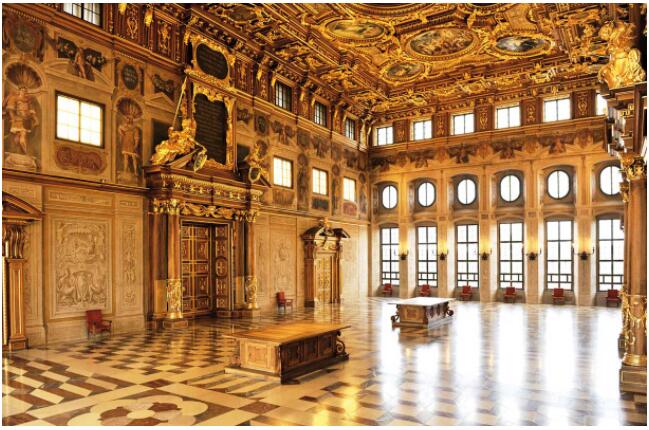 The gilded halls of Augsburg City Hall tell of the incredible wealth of the past.